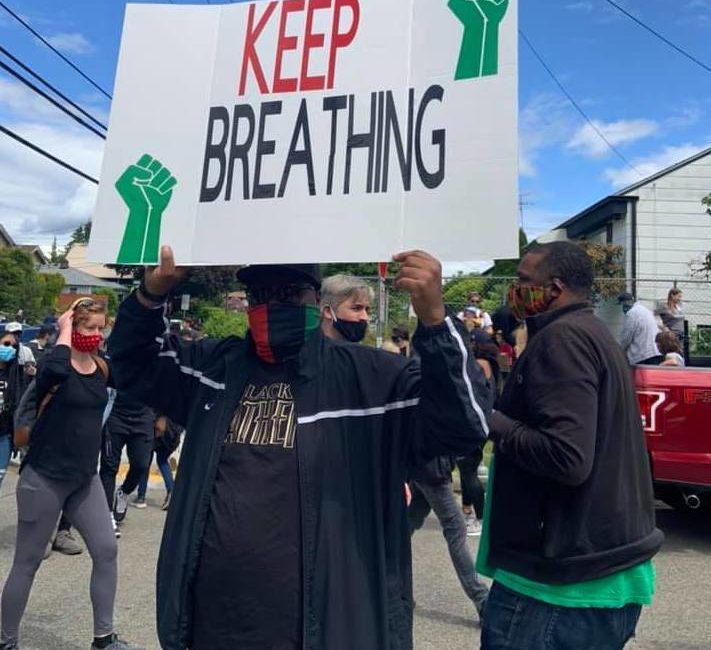 Show up, stand up for Black lives, and keep breathing

We showed up by the thousands. We stood in solidarity with our Black brothers and sisters who are rising up across the country and all over the world to say we’ve had enough of racism and police brutality.

Wearing masks and resisting the urge to hug and shake hands, a sea of people marched peacefully down Rainier Avenue in Southeast Seattle, undeterred by the deadly pandemic that has kept us quarantined for the past two and a half months.

It was an eruption of peace. Without police presence, and without incident, we took care of one another. It was the beauty of humanity.

Throughout the day, people walked up to me and marveled at the sign I held over my head that read “Keep Breathing.”

“That’s what we need to hear,” one guy told me. “We need to keep breathing.”

The grief we feel over the loss of George Floyd, Breonna Taylor, Ahmaud Arbery, Manuel Ellis, and so many others can feel so overwhelming at times, it’s hard to breathe through it.

But that’s what we have to do. Keep breathing.

George Floyd didn’t get that chance. With a knee to his neck, he told police he couldn’t breathe, over and over, pinned to the ground, his hands cuffed behind his back. He died being viciously denied the most basic of human rights: the right to keep breathing.

There is no PTSD for Black people when it comes to tragedies like this. Tragedies that keep happening. Again and again. Police violence, fueled by systemic racism, is an ongoing trauma that is suffocating the Black community.

Southeast Youth & Family Services stands in solidarity with everyone who is crying out for justice, for change, for a future where no one ever has to fight for right to keep breathing.

We stand with the young Black men and women who turn to us for compassion and counseling, support they need to heal from racism, inequality and countless other traumas that are everyday realities for far too many people of color in this country.

When they walk into our offices, we see a lot of questioning, a lot of doubt at first. Then after a while, we see confidence and resilience start to build. We see their heads lift, their eyes open. They’re standing tall. And they’re moving forward.

They can breathe. They’re still scarred, but they’re ready to get back out there.

George Floyd was pursuing his own path forward when his life was cut short. He was trying to turn things around, to move beyond troubles in his past and forge a better future. When we march and say his name, we must remember that with every step we take, we can only move forward ourselves — as individuals and as a society demanding justice — if we keep breathing.

James Baldwin once said: “To be a Negro in this country and to have a relatively conscious mind is to be enraged almost all the time. I cannot help but to be angry or to have rage.”

Find someone to talk to, someone who’s safe, trusted and healthy. It could a family member, a close friend, a coworker, or a counselor. When you take your mental health seriously, you’re not just helping yourself. You’re doing the work it takes to show up for the people in your life who love you, who might need some support so that they, too, can find the strength to breathe.

There are many ways to take a stand in solidarity with the Black community right now. Show up whenever, wherever, and however you can. And no matter what you do, no matter how difficult it is, remember to KEEP BREATHING!!! 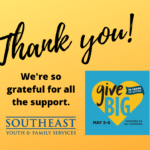 Previous:
BIG thanks for GiveBIG 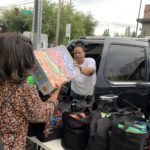